Back to Entrance of Museum 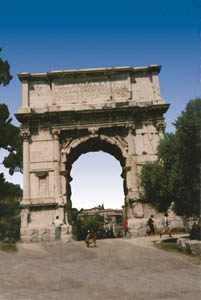 The Arch of Titus marks the sack of Jerusalem in 70 AD and fulfills the prophecy of Jesus.

Around 33 AD, Jesus made a prophecy concerning the destruction of Jerusalem that would occur because the people of Israel had refused to receive him as a prophet and as the Servant of the Lord [Isaiah 53].

And when he drew near and saw the city he wept over it, saying, “Would that even today you knew the things that make for peace! But now they are hid from your eyes. For the days shall come upon you, when your enemies will cast up a bank about you and surround you, and hem you in on every side, and dash you to the ground, you and your children within you, and they will not leave one stone upon another in you; because you did not know the time of your visitation.” (Luke 19:41-44, RSV).

Why was the temple destroyed? Jeremiah prophesied to Judah that when men put their trust in buildings and places instead of in God, then they would be disappointed. During Jeremiah’s day, people practiced immorality, but thought that God would have favor on them because they were God’s chosen and covenant people. They committed child sacrifice [ like abortion today], they enslaved others through economic power, and they deprived the widows and orphans of their property through legal but immoral acts.

Do not trust in these deceptive words: ‘This is the temple of the LORD, the temple of the LORD, the temple of the LORD.’ “For if you truly amend your ways and your doings, if you truly execute justice one with another, if you do not oppress the alien, the fatherless or the widow, or shed innocent blood in this place, and if you do not go after other gods to your own hurt, then I will let you dwell in this place, in the land that I gave of old to your fathers for ever. “Behold, you trust in deceptive words to no avail. Will you steal, murder, commit adultery, swear falsely, burn incense to Ba’al, and go after other gods that you have not known, and then come and stand before me in this house, which is called by my name, and say, ‘We are delivered!’ –only to go on doing all these abominations? Has this house, which is called by my name, become a den of robbers in your eyes? Behold, I myself have seen it, says the LORD. Go now to my place that was in Shiloh, where I made my name dwell at first, and see what I did to it for the wickedness of my people Israel. And now, because you have done all these things, says the LORD, and when I spoke to you persistently you did not listen, and when I called you, you did not answer, therefore I will do to the house which is called by my name, and in which you trust, and to the place which I gave to you and to your fathers, as I did to Shiloh. (Jeremiah 7:4-14, RSV).

God is continually calling us to trust in Him, and not rely upon shallow circumstances that give us assurance. Our nation, like that of Israel, can fall because of disobedience as well, so we also ought to not trust our military might or our economy. Nor should we presume that God will favor us as a “chosen nation,” much less as the “greatest nation on the face of the earth.” If God can bring down Israel for its immorality, certainly he can do the same to us.

What is interesting about this arch of Titus is the fact that the pictures on the inside of the arch show Jews being led away as slaves, and it shows many of the articles of worship that the Old Testament prescribed for use in the Temple: the Table of the Show Bread, the Silver Trumpets, and the Candelabra. Secular history confirms the practices of the Jews of Jerusalem. 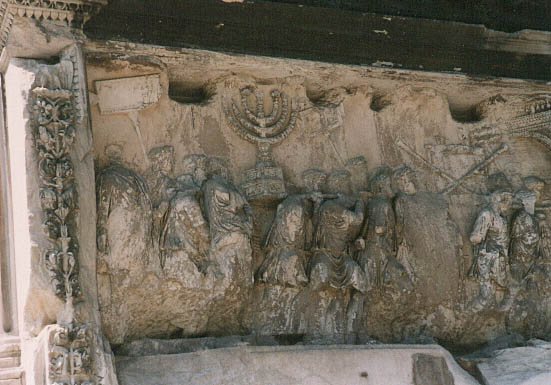 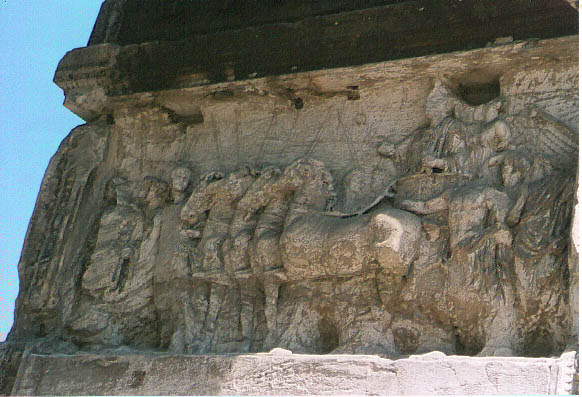 The Triumphal Procession of Titus, with captive Jews in the lead.

Jesus Prophesies the destruction of the Temple in Mark 13

And as he came out of the temple, one of his disciples said to him, “Look, Teacher, what wonderful stones and what wonderful buildings!” And Jesus said to him, “Do you see these great buildings? There will not be left here one stone upon another, that will not be thrown down.” And as he sat on the Mount of Olives opposite the temple, Peter and James and John and Andrew asked him privately, “Tell us, when will this be, and what will be the sign when these things are all to be accomplished?” And Jesus began to say to them, “Take heed that no one leads you astray. Many will come in my name, saying, ‘I am he!’ and they will lead many astray. And when you hear of wars and rumors of wars, do not be alarmed; this must take place, but the end is not yet. For nation will rise against nation, and kingdom against kingdom; there will be earthquakes in various places, there will be famines; this is but the beginning of the birth-pangs. “But take heed to yourselves; for they will deliver you up to councils; and you will be beaten in synagogues; and you will stand before governors and kings for my sake, to bear testimony before them. And the gospel must first be preached to all nations. And when they bring you to trial and deliver you up, do not be anxious beforehand what you are to say; but say whatever is given you in that hour, for it is not you who speak, but the Holy Spirit. And brother will deliver up brother to death, and the father his child, and children will rise against parents and have them put to death; and you will be hated by all for my name’s sake. But he who endures to the end will be saved. “But when you see the desolating sacrilege set up where it ought not to be (let the reader understand), then let those who are in Judea flee to the mountains; let him who is on the housetop not go down, nor enter his house, to take anything away; and let him who is in the field not turn back to take his mantle. And alas for those who are with child and for those who give suck in those days! Pray that it may not happen in winter. For in those days there will be such tribulation as has not been from the beginning of the creation which God created until now, and never will be. And if the Lord had not shortened the days, no human being would be saved; but for the sake of the elect, whom he chose, he shortened the days. And then if any one says to you, ‘Look, here is the Christ!’ or’Look, there he is!’ do not believe it. False Christs and false prophets will arise and show signs and wonders, to lead astray, if possible, the elect. But take heed; I have told you all things beforehand. (Mark 13:1-23, RSV).

This quote is analyzed in its parallel passage by Wm. Lane in the New International Commentary on the N. T. (NICONT – Eerdmans), in the Gospel of Mark.

In that book he makes two very convincing arguments about 1) two time frames and 2) fulfillment of part of the prophecy already:

1) Jesus is being asked 2 questions, which he does not answer in a strict sequential or chronological order: when will Jerusalem be destroyed, and what will be the sign of your return?

Jesus proceeds to give signs that are NOT SIGNS of the END: earthquakes, wars, false christs, tribulation, persecution, etc… during which time the gospel will be preached to all nations… but this isn’t the end. (Mark 13: 3- 13). Jesus concludes that when the end comes, like the taking of Noah, no one will know the exact day or hour… so ALWAYS BE READY!!! ( Mk. 13:32-37; see also Matt. 24:36-44)

2) The second part of Jesus’ answer deals with the destruction of Jerusalem itself, of which there are significant and specific signs: desolating sacrilege (Mark 13: 14-31) and which THIS GENERATION ( of Jesus’ day) will not pass away until it has happened. Lane goes on to list from Josephus’ account all those things which did indeed fulfill the very words of Christ about the destruction of the Temple and Jerusalem…

There were tremendous earthquakes recorded, there was smoke filling the air and a type of darkness, and the rebels installed a clown named “Phanni” as the high priest and dressed him in priest’s garments and seated him on the HOLY OF HOLIES as a Throne!!! IT was a total desecration and a mockery, the rebels (zealots) were so depraved. The ensuing tribulation was greater than anyone could have imagined. Starvation, eating of children for food, etc…

Mark makes clearer Jesus’ particular responses to his disciples’ two questions. And I believe Lane does a better job of making a commentary explain these points than any I have ever read.

All materials are 1998 The Scholar’s Corner and may not be reprinted without prior written permission, unless otherwise noted. Website designed by Peterson Sales.