Enlightenment Rationalism and the Problem of Fundamentalism

Or, How Misreading the Scriptures’ Intent Has Damaged The Christian Witness to the Modern Age.

“As for you, you whitewash with lies; worthless physicians are you all. Oh that you would keep silent, and it would be your wisdom! Hear now my argument and listen to the pleadings of my lips. Will you speak falsely for God and speak deceitfully for him?” – Job 13:4-7

We are all products of our age. Assumptions we make about reality and truth are called our Worldview. The problem for us is that we cannot always see the prejudices of our assumptions, and when we interpret everything through the lens of our own understanding we often create misunderstandings without realizing it. This is also true of how we apply our assumptions to the interpretation of Scripture.

The Bible has faced many challenges throughout the ages. No one now questions whether the earth revolves around the sun, or the fact that the earth is not the physical center of the universe. However, that notion created a great challenge to the integrity, authority, and reliability of the Scriptures for the Church of Galileo’s day. In the late 18th Century, new challenges to Scripture arose largely due to the advent of Enlightenment Rationalism. A field of study, called the Historical-Critical Method, began to challenge the reliability of the historical nature of the Bible. One problem was the conflicting timelines in the Gospels themselves, with slight variations of the sequences of the stories. Since it was assumed by the interpreters that biblical, historical literature would follow a strict chronology, as any modern historian would, then the various timelines of the Gospels could be reconciled. A project called the Synoptic Gospels attempted to align historical events in Matthew, Mark, and Luke into parallel columns. Because of the apparent contradictions in the timelines of the Scriptures, it was then assumed by critics that the Scriptures were not reliable or historical. Because of these apparent contradictions, many critics jumped on the texts in an effort to attack or disprove Christianity, the Bible, and religion in general.

This critical line of thinking came to its inevitable conclusion within Christian Theology in the works of Rudolph Bultmann, who denied the possibility of the miracles and the resurrection of Jesus Christ because they were not scientific and the result of primitive thinking of people in a pre-scientific age. We can see here that Bultmann was clearly imposing his own Newtonian Worldview upon the text. Is it possible that only what we can prove through repeatable experiment is true? Or is God, if he exists, bigger than our microscope? Can God abridge what we call “reality” and do whatever He wants? 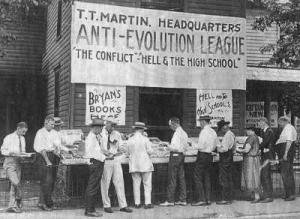 At the same time as Historical Criticism was gaining popularity, Darwinianism and the Theory of Evolution provided a second significant challenge to Biblical accounts of creation and sacred history. Darwin’s works in 1858 and 1871 provided religion’s antagonists with more ammunition, and again the Church felt threatened and cornered by these events.

As a reaction to these attacks, a branch of theology known as Fundamentalism began in Princeton in the late 1800’s. Its goal was to preserve faith in the veracity of the Scriptures. Fundamentalism’s principal tenant is that the bible is “inerrant”:

Biblical inerrancy, as formulated in the “Chicago Statement on Biblical Inerrancy“, is the doctrine that the Protestant Bible “is without error or fault in all its teaching”;[1] or, at least, that “Scripture in the original manuscripts does not affirm anything that is contrary to fact”.[2]

In layman’s terms, the idea of the Bible being inerrant is that whatever it teaches is literally true. While not the same as Fundamentalism, Literalism is an extension of the attempt to prove the faithfulness of the Scripture in all that it teaches.

The Problem with Fundamentalism

The problem with Fundamentalism is not the fact the Scriptures are true, but in understanding the way they are true. Fundamentalism’s weakness is that it is playing on the same field and by the same rules set up for it by Enlightenment Rationalism. A fundamental approach to the Bible assumes that the record of the Scriptures, specifically the Gospels, is meant to be be taken in a strict, chronological manner when chronology was not the concern of the writers at all. In other words, Fundamentalism is imposing an Enlightenment Rationalist framework on the Scriptures as an historical record but does not understand the intent, the method, and literary purpose of the Gospel writers. In the end, fundamentalists fight for truth but lose the battle because the Scripture itself contradicts their understanding.

What do I mean by this statement?
I think is rather naive to think that just because someone has found in the Bible apparent conflicts and passages which offend modern sensibilities, that someone has somehow been able to disprove the value and validity of the Scriptures. It is naive to think one has discovered the “gotcha” – without having spent years investigating the historical and cultural context of the writers and weighing the arguments fairly on either side.

Both fundamentalists who defend the scriptures and atheists who attack the chronological inconsistencies, and minor reporting errors, in the New Testament, have made a significant cultural mistake. They are treating the writers of the New Testament as if they were the product of the age of Enlightenment Rationalism and were trying to create an exact, journalistic report of events in sequence. Nothing could be further from the truth. The Gospel writers were not writing down facts in order of occurrence, they were using historical events to show how the life of Jesus fulfilled the prophetic typology of the Scriptures. In other words, while being faithful to the events, they were not very concerned to live up to our historical methodology. The writers were creative theologians, using the life of Jesus to show how his life fulfilled the scripture’s predictions about the Messiah.

We have an historical attestation to this effect from the 2nd Century Papias, who said,

“Mark having become the interpreter of Peter, wrote down accurately, though not in order, whatsoever he remembered of the things said or done by Christ. For he neither heard the Lord nor followed him, but afterward, as I said, he followed Peter, who adapted his teaching to the needs of his hearers, but with no intention of giving a connected account of the Lord’s discourses, so that Mark committed no error while he thus wrote some things as he remembered them. For he was careful of one thing, not to omit any of the things which he had heard, and not to state any of them falsely…So then Matthew wrote the oracles in the Hebrew language, and every one interpreted them as he was able.”

So, to my mind, minor divergences of reportage on small details do not destroy the credibility of the widespread agreement of the authors on the major points. Jesus was crucified, Jesus died, Jesus was astoundingly raised from the dead. In fact, without his resurrection, they would have had no motivation to write anything, since immediately after his death they were all running for their lives afraid the same fate was to befall them…

Just to sum up the point: how can you know the meaning and validity of the scriptures if you don’t know the authors’ purpose, literary method, and intent? There is a literary form and structure of the Gospels, which most people miss. They were publicists, not simply historians. The Gospels are a literary genre called typologies. They wanted to show how Jesus is the fulfillment of the types revealed in the Old Testament books. They organized and arranged the events of Jesus’ life to fit the literary pattern of the first 6 books of the Bible. Matthew, Luke, and John, all use a different book of the Tanakh to reveal how the events of Jesus’ life are the fulfillment of the First Covenant. Matthew records Jesus’ 40 days and nights in the wilderness and his subsequent Sermon on the Mount. This part of Jesus’ life fulfills the paradigm of Exodus, where Moses is on the Mount for 40 days and nights and brings down the 10 Commandments and teaches the people from the mountain. Jesus is the new Moses, according to Matthew. Luke, however, records Jesus’ Sermon on the Plain which follows the book of Deuteronomy where Moses recounts the history of the Law on the Plain outside the promised Land. Again, to Luke, Jesus is the new Moses. John uses the book of Joshua {Joshua is the Hebrew name for Jesus} to reveal how Jesus’ crossing the Jordan river corresponds to Joshua’s crossing the river when the people of Israel entered the Promised Land. Jesus is the new Joshua, bringing the people of God into the New Promised Land of the Spirit by his death and resurrection…

My point is this: if you don’t understand what the authors’ intent and purpose were, you cannot impose upon them modern, journalistic forms and expect the results you want, either for or against. You are arguing apples against oranges. Fundamentalism, by imposing a modern-day historian’s method upon the texts of the Bible, is unconsciously assuming an Enlightenment Rationalist’s Worldview and does not understand the purpose and intent of the writers. And critics of the truthfulness of Scripture have proven nothing by pointing out such inconsistencies because they are “proving” false what the writers never intended to be true in the first place. They are, however, scoring points against a Fundamentalist’s interpretation of the Scriptures, but they are not disproving that the Bible. Atheists and antagonists may be reacting to the defensiveness of Christians, who insist on setting up arguments that can clearly be shown to be false in defense of their God, but they have not disproven the Scriptures at all. The Bible’s truth is infallible. Its moral teaching inviolate and timeless. But to understand its truth, you need to know what the writer actually intended.

For example, while the sun does not actually rise in the East, but the earth rotates towards the dawn, as we now know, the truthfulness of the Psalmists’ declaration does not change: all Creation declares the Glory of God. It is still God’s Word to humanity. You just need to understand how and in what way. It is worthy to be believed and followed. We just have to trust that God inspired the writers to use the liberty of a creative theological purpose in assembling the events of Jesus’ life.