Nicolaitan Spirit   – Nico = To Conquer/Laitan = the laity, the people.

“So hast thou also them that hold the doctrine of the Nicolaitans, which thing I hate.” Revelation 2:15, KJV. 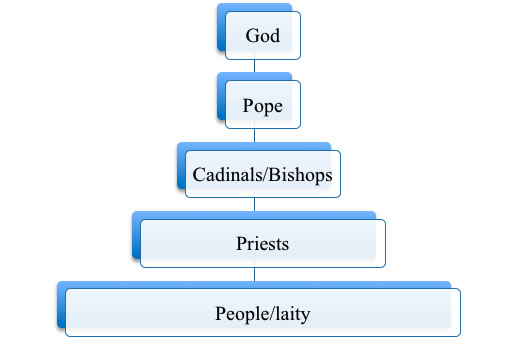 The error of the Nicolaitans was to teach that the  priests were given secret and special knowledge not available to the people, and thus were also given the rights and privileges to administer the sacraments and operate in the Gifts of the Holy Spirit, not available to the laity. This created a special holy, religious class of priests that were above the people and supposedly closer to God than ordinary Christians. It also created an unbiblical hierarchy where the only way to have access to God was through the priesthood and then the pope, thus putting a wall of separation between God and his people.  This hierarchical structure also happens in independent, authoritarian churches and personality driven churches, where the pastor is seen as God’s voice to the people. That pyramid would be much simpler and would look something like this: 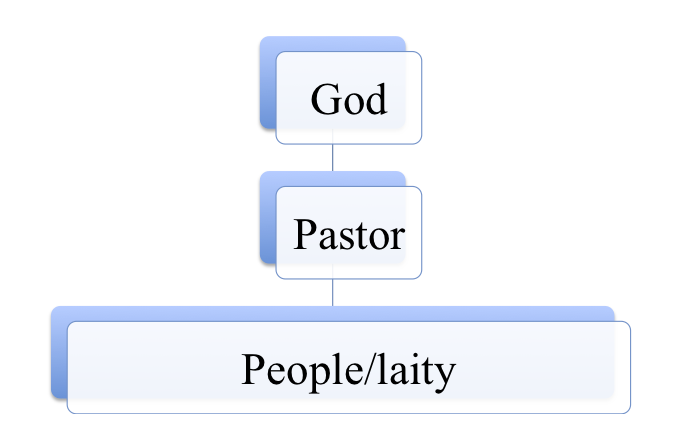 But we have one High Priest, Jesus, who is the only Mediator between God and Man:

“For there is one God, and one mediator between God and men, the man Christ Jesus;” 1 Timothy 2:5, KJV.

“Therefore, brothers, since we have confidence to enter the Most Holy Place by the blood of Jesus, by a new and living way opened for us through the curtain, that is, his body, and since we have a great priest over the house of God, let us draw near to God with a sincere heart in full assurance of faith, having our hearts sprinkled to cleanse us from a guilty conscience and having our bodies washed with pure water.” Hebrews 10:19-22, NIV.

“You say, ‘I am rich; I have acquired wealth and do not need a thing.’ But you do not realize that you are wretched, pitiful, poor, blind and naked.” Revelation 3: 14-17, NIV. 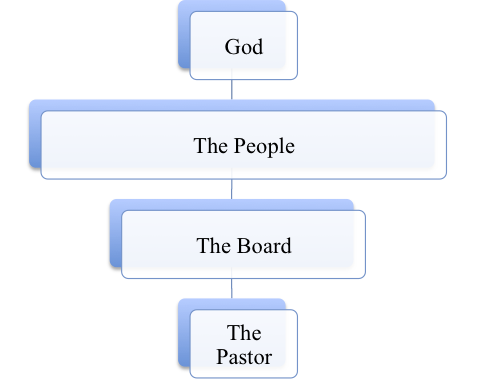 The pastor as hireling, hired to do the will of the people. Many Baptist organizations function with this polity, but Democracy does not have a good rap in the scriptures.  It leads to several problems:

God can use any form of church government IF all the people are godly, mature and obedient, but the democratic form of government is the most susceptible to being ruled over by the impatience, fears, and selfishness of human nature. The hierarchical model is most susceptible to abuse of the people. The Presbyterian system is supposed to be biblical in nature, but in practice, it has become democratic in function, political and not spiritual in nature. Similar to the democratic model is the corporate or business model, where the board is the ruling power, but the pastor is merely a hired hand to do the board’s bidding.

“And when they had appointed elders for them in every church, with prayer and fasting they committed them to the Lord in whom they believed.” Acts 14:23, RSV.

“This is why I left you in Crete, that you might amend what was defective, and appoint elders in every town as I directed you,” Titus 1:5, RSV.

“When morning came, he called his disciples to him and chose twelve of them, whom he also designated apostles:” Luke 6:13, NIV.

“After this the Lord appointed seventy-two others and sent them two by two ahead of him to every town and place where he was about to go.” Luke 10:1, NIV.

First of all the leadership is functional: it is defined by what it does as part of the administration of the government of God through the Church on the Earth. The role of the leadership is not to be a mediator between men and God, but to equip the people to do the ministry that God has called them to do.

“And He Himself gave some to be apostles, some prophets, some evangelists, and some pastors and teachers, for the equipping of the saints for the work of ministry, for the edifying of the body of Christ, till we all come to the unity of the faith and of the knowledge of the Son of God, to a perfect man, to the measure of the stature of the fullness of Christ;” Ephesians 4:11-13, NKJV.

So I need to create two models here: one for practical function and one for theological meaning. There aren’t any exact org models that fit this layout, so these are approximations. 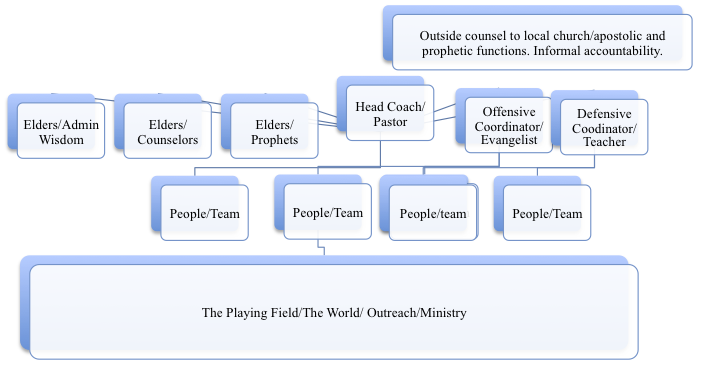 The parts here are all inter-related to the world and direct outreach. I just can’t draw the lines because they would be too many. The General Manager is God in this model and all the people and offices have a direct line to Him too.

The word for church in Greek is Ekklesia. It means the governing council of the local city. Jesus meant that the church should be his local government in every city in which it is placed, so that the dominion of God, God’s government could be established there through the Church. God gives to the Church pastors, prophets, evangelists, teachers, etc. as official functions of his government’s administration. These offices to not make them more spiritual or closer to God than anyone else, but even though I am equal to the President of the United States or the Governor in the eyes of God, if either entered the room I was in, I would stand up to show them respect and honor… for they are appointed of God to that office. In the same way, God demands that we respect and honor those whom he appoints to the government of his house – and how much more so, because they represent the King, if they are spiritual, mature, not self-seeking, and obedient to their Lord. Although we are all brothers and equal in the sight of the Lord, we are to “excel in showing honor” to one another (Romans 12:10). Yet those appointed to these offices are not to seek honor nor be self-serving, but strive to be the servants of all. Therefore, if they are humble, they may not be looked upon with high regard by the people. They are not to Lord it over the people, but to strive to lift up the people and train them in the Lord, so that they may fulfill their destiny. So the theological model of ministry is an upside down pyramid. This model idea came from Brad McKoy and the Student Church Movement. 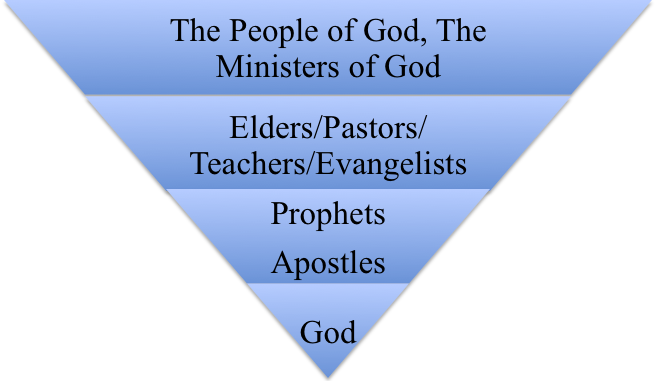 In the New Testament, the apostles went and planted churches but did not pastor them. They appointed pastors and elders. Antioch is a good model of how the church functions. The prophetic elders appointed Paul, by the direction of the Holy Spirit as an apostle (apostle means to be sent) and sent him out (Acts. 13:11-3). Deacons were selected by the people and approved by the elders (Acts 6:3). The point is that if God is using prophets to appoint pastors and elders, and we dishonor those God has appointed, we are dishonoring God who called them to that office. Theocracy is God’s government through those he appoints to function as coaches to train the people. Leaders aren’t elected, they are recognized by the people, affirmed, but appointed by God. To ordain means to appoint.

The point of the preceding image is not that God is small, but that He is the foundation of all, and his rule is anti-hierarchical. He is the chief servant. Jesus came to model humility and servant-hood. Too often we have seen authority as a pyramid of power, when Jesus actually came to model a coach who helps others succeed, to come to their full potential, and fulfill their calling before God.

“Take my yoke upon you, and learn of me; for I am meek and lowly in heart: and ye shall find rest unto your souls.” Matthew 11:29, KJV. 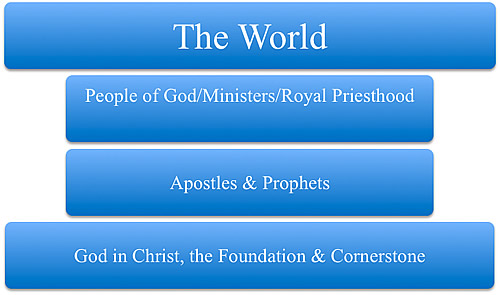 “For no other foundation can any one lay than that which is laid, which is Jesus Christ.” 1 Corinthians 3:11, RSV.

“And he said to them, “The kings of the Gentiles exercise lordship over them; and those in authority over them are called benefactors. But not so with you; rather let the greatest among you become as the youngest, and the leader as one who serves.” Luke 22:25, 26, RSV.

“So then you are no longer strangers and sojourners, but you are fellow citizens with the saints and members of the household of God, built upon the foundation of the apostles and prophets, Christ Jesus himself being the cornerstone, in whom the whole structure is joined together and grows into a holy temple in the Lord; in whom you also are built into it for a dwelling place of God in the Spirit.” Ephesians 2:19-22, RSV.

“But you are a chosen race, a royal priesthood, a holy nation, God’s own people, that you may declare the wonderful deeds of him who called you out of darkness into his marvelous light.” 1 Peter 2:9, RSV.